History of the Constaine Station

It is not known if the little station illustrated traveled by flatcar but it has been across the province and back again. It was built about 1930, one of four small stations on a new 10 mile long short-line connections between the Murray Harbour Branch at Lake Verde and the Georgetown Branch at Maple Hill, near Mount Stewart. The short line was created as an alternate route to Charlottetown from Murray Harbour when the rails were changed from narrow to standard gauge. THe Hillsborough Bridge could not support the heavier trains and was subsequently closed to all rail traffic in 1951. The little station came from Auburn. The other three were in Clarkin, Watervale and August  and all four were "flag" stops. Like all railway structures they were built of heavy lumber. Aubrun Station measures 18'4 trackside by 9'7" deep, with a man door and a freight door opening into a single unadorned space. Improvements in roads on the Island affected the railway passenger service which was shut down in the late 1960s. Most flag stations to Bloomfield in Prince County as a section shed for work crews and possibly housed one of their trolleys. Once the railway closed down in 1989, the derelict building was acquired and preserved by history buffs in Stanhope. They donated the building to the PEI Railway Museum in Elmira in 2016. 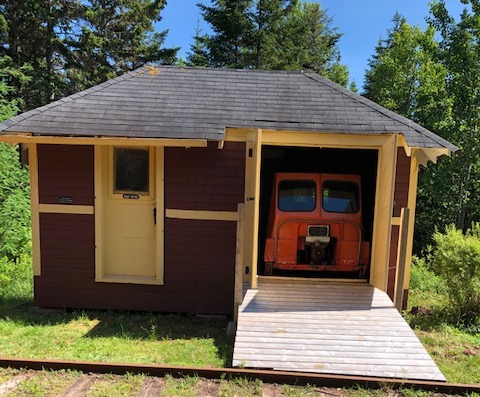 This early velocipede was used on the rails by section men. When a train was approaching they would roll to the side and take it off the track until the train passed. This velocipede was donated by Mr. Alexander Stewart, Marshfield who worked for CNR 1912-1931.

The bicycle velocipede was adapted to ride the rails by Keith Pratt, a railway enthusiast from Bloomfield, PE. It was donated to the Elmira Railway Museum by Dutch Thompson. 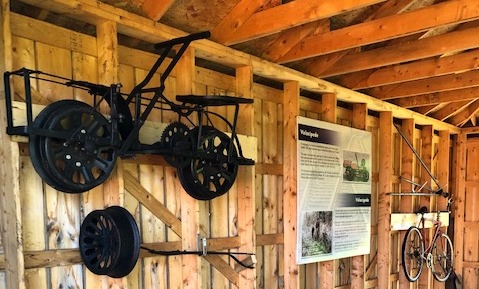 The Caboose was orignally built in 1912. The caboose was used by Grand Trunk Railway, which was a 19th century Canadian railway system based primarily in Ontario and Quebec, with operations over much of Canada. The Grand Trunk became troubled finanically and was nationalized by the Canadian Government in 1921 and merged into Canadian National Railways in 1923. The caboose was used until the 1980's by CN. It was then purchased by the MacDonald's Resturant and placed on Univeristy Avenue where it was used from birthday parties until their expansion in 1997. The caboose was obtained by the Prince Edward Island Museum and Heritage Foundation in 2009 and moved to the Elmira Railway Museum. The exterior has been completely restored and plans are underway to restore the interior. 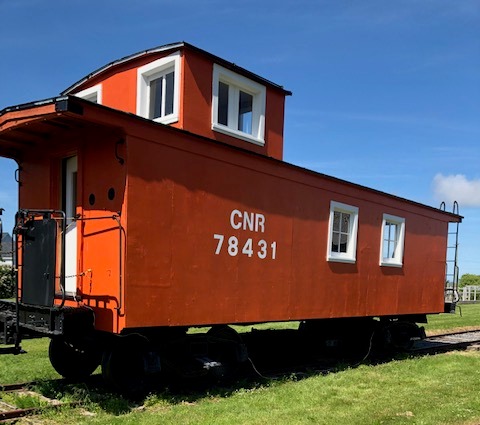 Elmira Railway Museums "End of the Line" exhibit is part of the Community Memories page of the Virtual Museum of Canada. Click on the link to see wonderful pictures of the railway!


The permanent exhibit at Elmira contains many items from the retired CN ferry - The Abegweit. For many decades, the trains helped connect passengers to the CN ferries which took people and goods from PEI to the mainland and back. At a time when the trains still ran on the Island, you caught the right train to be on time for the ferry, and caught the right ferry to be on time for the train.
Bridge telegraph, which transmitted ship speed commands below deck along with the ship's compass

A reflecting kerosene lamp from the Abegweit